Seoul, the capital city of South-Korea, is a dynamic city where modern skyscrapers, K-pop culture, and high-tech public transport meet the traditional palaces, Buddhist temples, street markets, and mountain trails. For us, Korea feels like the unknown land between crazy Japan and intrusive China. Or at least, it feels like that before visiting. Actually, we never considered going, but luckily we made Korean friends that we have to visit! We fall in love with Korea, and especially when we travel to Seoul. We stay for two whole weeks in the city and we could stay much longer.

Through Couchsurfing, we stay with locals in four different parts of Seoul. Staying in all those different parts of the city gives us the opportunity to explore every part from a local perspective. Our Couchsurfing hosts show us the best places in their neighborhoods, including the best restaurants! We discover Korean cuisine, and we totally love it. If you like coffee: Seoul is a coffee paradise! We challenge you not to fall in love with the city (+ food) after these things you can’t miss in Seoul! 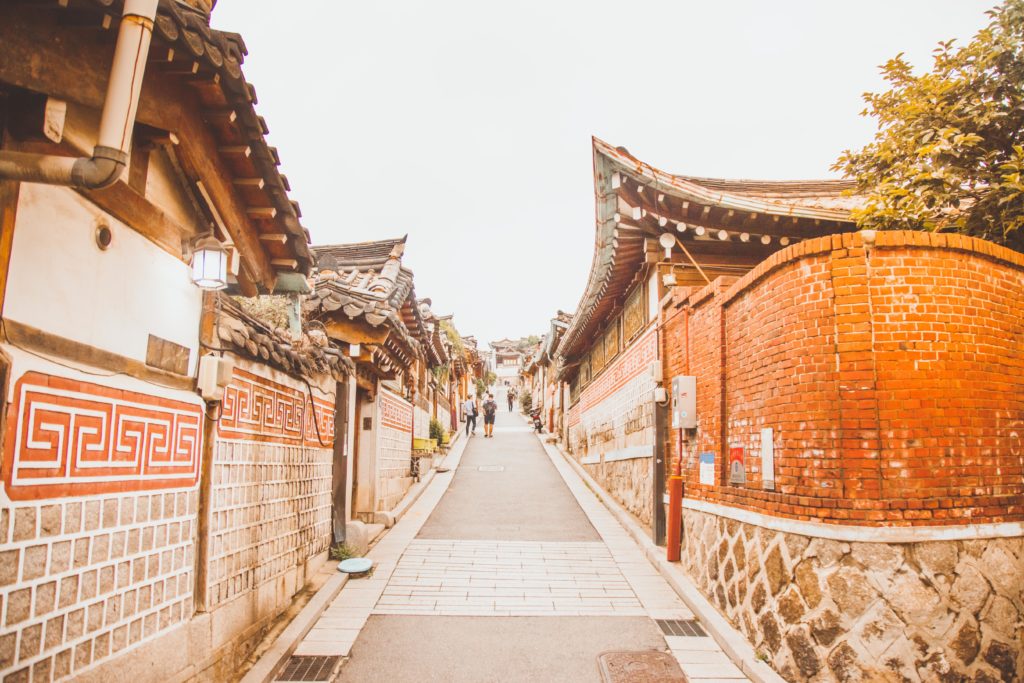 This highlight already starts with the Gwanghwamun Square in front of it, with statues of the two most respected historical figures in Korea, Admiral Yi Sunshin and King Sejong. The palace is the largest of all palaces in Seoul, you can’t miss it when you visit the city. If you wear traditional Korean clothes – you can rent them at lots of places – the entrance is free! In addition, your pictures will be extra pretty! Twice a day there is a changing of the guard ceremony, which is pretty fun to see. Make sure to check the ceremony times before you visit!

Our favorite area of the city! Always busy with many youngsters, street performances, which results in a great vibe. Located right in the middle of the area is the Gyeongui Line Forest Park. This park was created when the Gyeongui railway went (partially) underground. It’s a unique place where you can enjoy urban culture and greenery at the same time. It’s also a great place to have a beer at night with friends and mix with the locals.

Seoul’s new sky garden! You can go there to cool-off your feet in a purple pool, to see all the plants or just to see an awesome view! The Korean name Seoullo translates to ‘towards Seoul’ and ‘Seoul Street’. It’s located in the heart of Seoul, on a former city highway, and has 24.000 different Korean plant species including trees and flowers.

Namdaemun market is the largest market in Korea. The market is famous for the countless low priced shops selling clothes, household times, and food. We had some traditional Korean dishes like Hotteok – a very delicious cinnamon sweet pancake. Maybe a better market for food is the Gwanjang market, where we had Pajeon – delicious savory pancakes. This market is a bit more expensive, but has tons of places to eat!

A 10 km-long stream flows from Gwanghwamun to Dongdaemun. It’s great to stroll along the stream and cool off under the occasional bridges. And especially during the night, the bridges are lit with fantastic lighting. We even saw a fountain light show! Since we were in Seoul during the rainy reason, we also saw the stream with a heavy flood: it changed the peaceful summer stream into a dangerous-looking river!

A street that represents the traditional Korean culture with antique art, bookstores, traditional teahouses, and craft shops. We had some really nice crêpes on the street and saw some street performers!

The world’s longest bridge fountain! If you are lucky you can see the Moonlight Rainbow Fountain light show. We were not so lucky. We went there twice but didn’t see a light show. Due to weather conditions, the show may be canceled. When we went to Banpo Hangang Park to see the show, the water was either too high or too dirty. We did enjoy two beautiful sunsets and delivery Chimaek (chicken & beer). That is another great thing about Korea: you can have your food delivered anywhere!

Itaewon feels like a different world in the city. This is the foreigner’s neighborhood of Seoul, where you can find the multicultural part of Korea. If you’re in the mood to eat something other than Korean, this is the place to be. It’s also the place to be for a great party! Two Korean friends took us to the club The Fountain and we had the best time! 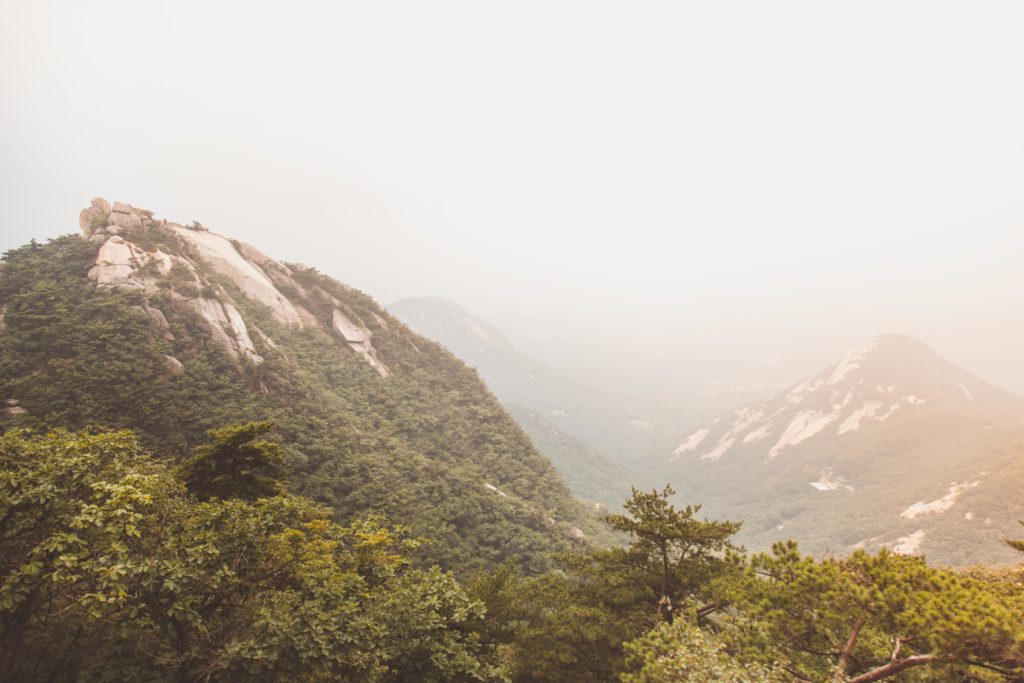 This national park is close to Seoul and definitely worth a visit if you love a hike. Bukhansan means “big mountain in the North”, and it’s definitely a big mountain. Reaching the top of the Baegundae peak was incredible but took us three hours when taking the long road. 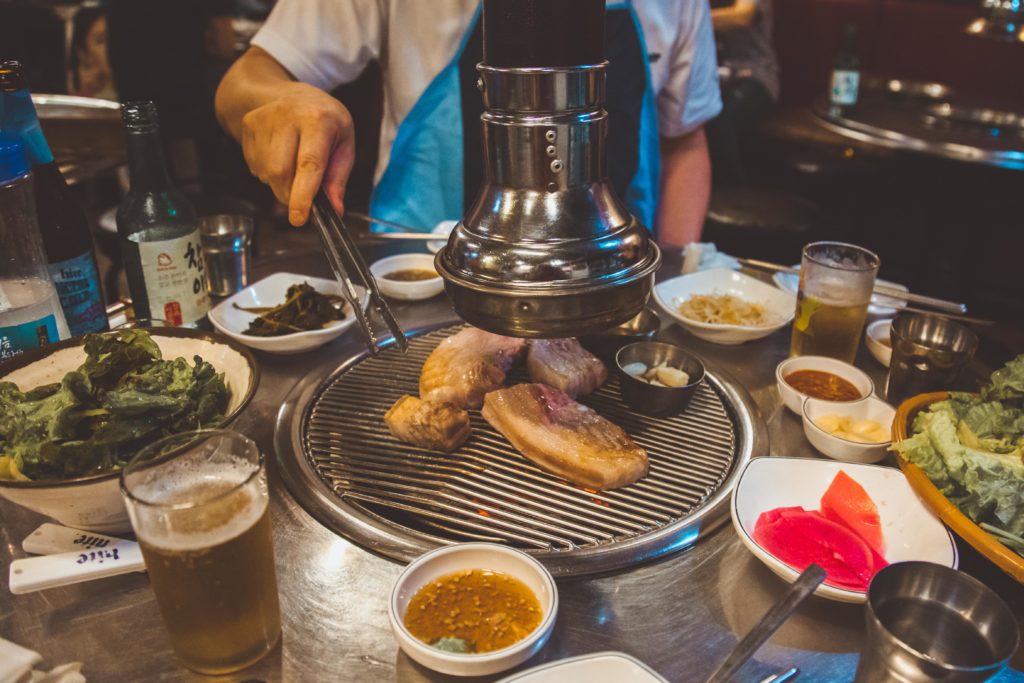 As mentioned earlier, we really love Korean food. It’s so much more than Korean BBQ and kimchi. Being in a vegetarian or vegan in Korean will be tough, everything has meat, lots of meat. Chimaek is a Korean dish that we really like. Beer in Korean is ‘Maekju’, so ‘chicken’ and ‘Maekju’ make Chimaek, so chicken and beer. Korean BBQ is never the same, the options are always endless. You can get different kinds of meat, thin meat, minced meat, pork beef, you can grill it yourself or someone can do it for you and you can get in on a grill or get it on a stove. It’s never the same, but the side dishes are always free! Besides going to a KBBQ restaurant we would recommend having home-style food (in a restaurant or at a local’s home) or enjoy Seoul many delicious street foods.

See more? Take a look at our South-Korea Gallery!

Already planning your trip to Seoul? We hope you find this article useful for your visit. And if you have any questions or comments, let us know!

TRAVEL PHOTOGRAPHY | South-Korea Gallery | Once Upon A Journey

Great list and read about Seoul. Seoul is is a destination we want to goin the future.

[…] Want to read and see more of Korea? Check out our Korea Gallery and our tips for Seoul! […]

Hi! We’re Roxanne (L) and Maartje (R): two girls in love with each other, the world, writing, and photographing!

Once Upon a Journey