If you have ever seen pictures of the lantern festival Thailand, you are probably as enchanted as we were. Thousands of lanterns floating into the sky, all around you – just like that one scene in Tangled. Okay, admittingly, that’s how we found out about this festival in the first place. The idea of something so magical happening in real life was too good not to check out ourselves! The place to go to in Thailand for the most magical experience is Chiang Mai. The Chiang Mai lantern festival, Yi Peng, is a globally famous festival. And as experiencing the festival only once wasn’t enough for us, we went two years in a row (in 2017 and 2018).

We dove deep into the web to find everything about this sensational event and unfortunately, instead of magic, we found a struggle. There is surprisingly little information on this increasingly popular event and the information that is out there is very vague… Our mission, aside from experiencing our Disney moment, became to collect the best information and tips for YOU to experience the magic! In this guide, we will tell you everything you need to know about the lantern festival Thailand, so you’re not as lost as we were!

Yi Peng, or Yee Peng, is the local name of the lantern festival in northern Thailand. Yee means two and Peng means full moon day, which relates to the night of the festival: during the second full moon of the Lanna calendar. As the festival is held on the second full moon of the Lanna calendar, it’s every year on a different date. Usually, this is in November. In 2019 it takes place on November 11-12, though there will also be activities before November 11 and 12. Often the Tourism Authority of Thailand (TAT) launches the exact program of the Chiang Mai lantern festival at the beginning of October.

Yi Peng lantern festival is celebrated at the end of the rainy season; it is a celebration of a new beginning. Letting a lantern into the sky symbolizes letting go of the bad and to let good new energies in for a brighter future. You let go of misfortunes and illness of the previous year. Definitely make a wish when you release your lantern – it might come true, provided that you behave well in the new year.

NOTE: every year the program of Yi Peng is slightly different, though, there will always be two nights where you can release lanterns!

As for the krathongs: when you let a krathong in the water, it will take away your sins and bad luck. And when you make a wish, the krathong will carry it into the new year for you. For Thai people, releasing the krathong is also a way of thanking the water Goddess for providing all water.

Where To Go For Chiang Mai Festival of Lanterns?

Let’s get organized! As Yi Peng is celebrated solely in northern Thailand (Loy Krathong is celebrated more broadly), that’s where you should go. Chiang Mai festival of lanterns is known to be the largest celebration – as it’s the ancient capital of the former Lanna kingdom (remember it’s a Lanna calendar festival?). The lantern festival Chiang Mai is FREE to attend, though every year more and more commercial and touristic mass lantern release events pop up.

Big private events like the one at Mae Jo University, people release the lanterns at a specific time together. Photo credit: Carlos Adampol Galindo from DF, México [CC BY-SA 2.0]

Those big releases are not the actual, authentic Yi Peng lantern festival. They are privately organized and therefore expensive. Let us tell you: you don’t need to spend that much to see hundreds of lanterns floating into the sky. You can see it in the city as well – for FREE! When we asked the locals what was the best place to go for Yi Peng the answer was always “everywhere”. Totally frustrating if you try to find the BEST spot, but we totally get it afterward – the sky lanterns are everywhere. Lucky for you, we will provide more guidance than the locals because we did find some perfect spots!

The official festival takes place for three nights, though last year the festivities were held for five nights. We suspect the duration lasts longer as popularity grows! The Tourism Authority of Thailand (TAT) announces a program with the official activities every year, usually one month before the actual event. On the night before the full moon, there’s usually an opening ceremony, during the other two nights after the opening ceremony many lanterns will light up the sky and on the third night, there’s also a parade. The nights that you are allowed to let your lantern in the sky will be on November 11 and 12, 2019.

A couple celebrating the lantern festival on the Nawarat Bridge

Not sky lanterns, but decorative lanterns

Hundreds of lanterns lighting up the sky

Fireworks above the Nawarat Bridge

Friends releasing a lantern together on the bridge

Gorgeous floats ride in the parade

Want to read more about our Yi Peng magic? Read our travel journal!

Lighting up a lantern together

And then something very special happened… Read about Maartje’s proposal!

Will you marry me?

This temple is such a magical place to light up your lantern and there are monks walking around to help you! 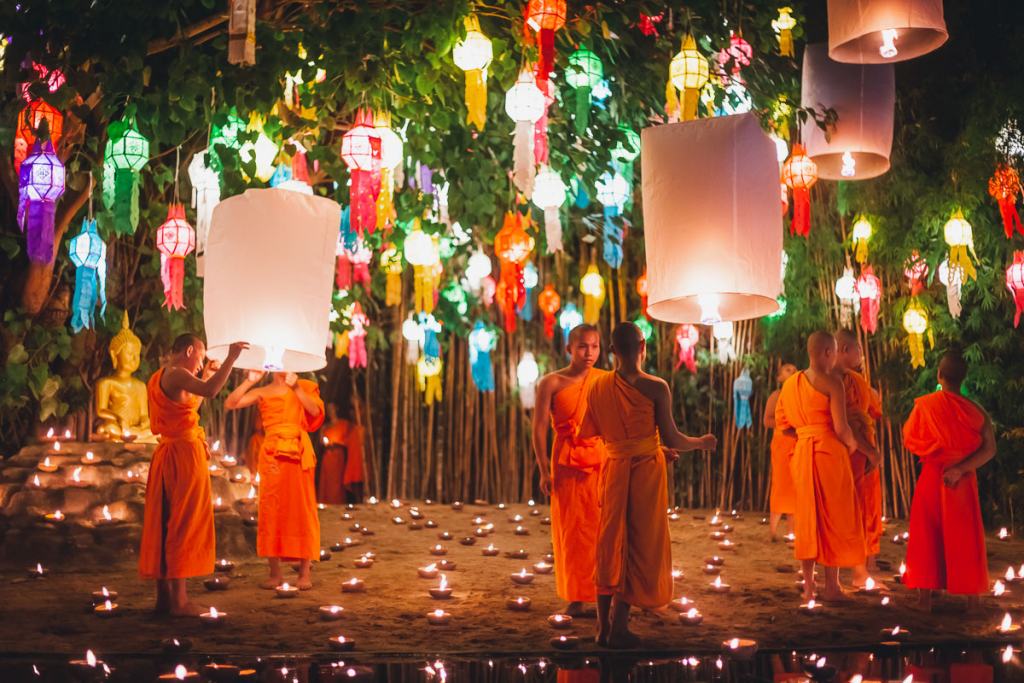 We highly recommend attending the Buddhist ceremony later during the festival!

There’s no need to buy your lanterns in advance: you can buy lanterns everywhere on the nights of celebration. They cost around 50 to 150 baht and there are different sizes.

Let us know if you have any questions and/or additions in the comments below! Feel free to send us a message and don’t forget to share our tips with your friends. Enjoy this magical lantern festival in Thailand.

Hi!! We would be on the 11th of November in Chiang Mai but need.to be in Bangkok on the 12th.

It is a good idea to take the night bus that departs chiang mai at 23 pm?? or is too early?

I've seen that the ceremonu starts at 20pm.... when does it finish ( aprox)

Hi Silvia! The ceremony can go on for a while! But you can always decide to leave earlier!

Amazing shots! Just wondering though did y’all have to pay for a ticket or an entrance fee? I am planning to visit in November this year!

Thanks so much! And you're gonna love it. Only the big events are paid, the rest is all free (let us know if anything is different this year!). ENJOY!

Those are some really pretty pictures of this lantern festival. I love seeing all of the different types of lanterns you can get. I wonder if you can buy lanterns that are similar to these online that you can have around your home or in your yard.

Probably! You can find everything online, right?! It would be so interesting to get more permanent lanterns for a backyard or so!

This festival looks fantastic! Would love to visit it one day.

Your photos are awesome by the way. Thanks for sharing your article, it's fantastic!

Thanks so much, means a lot!

WHOAH you totally should!

Hi! We’re Roxanne (L) and Maartje (R): two girls in love with each other, the world, writing, and photographing!

Once Upon a Journey