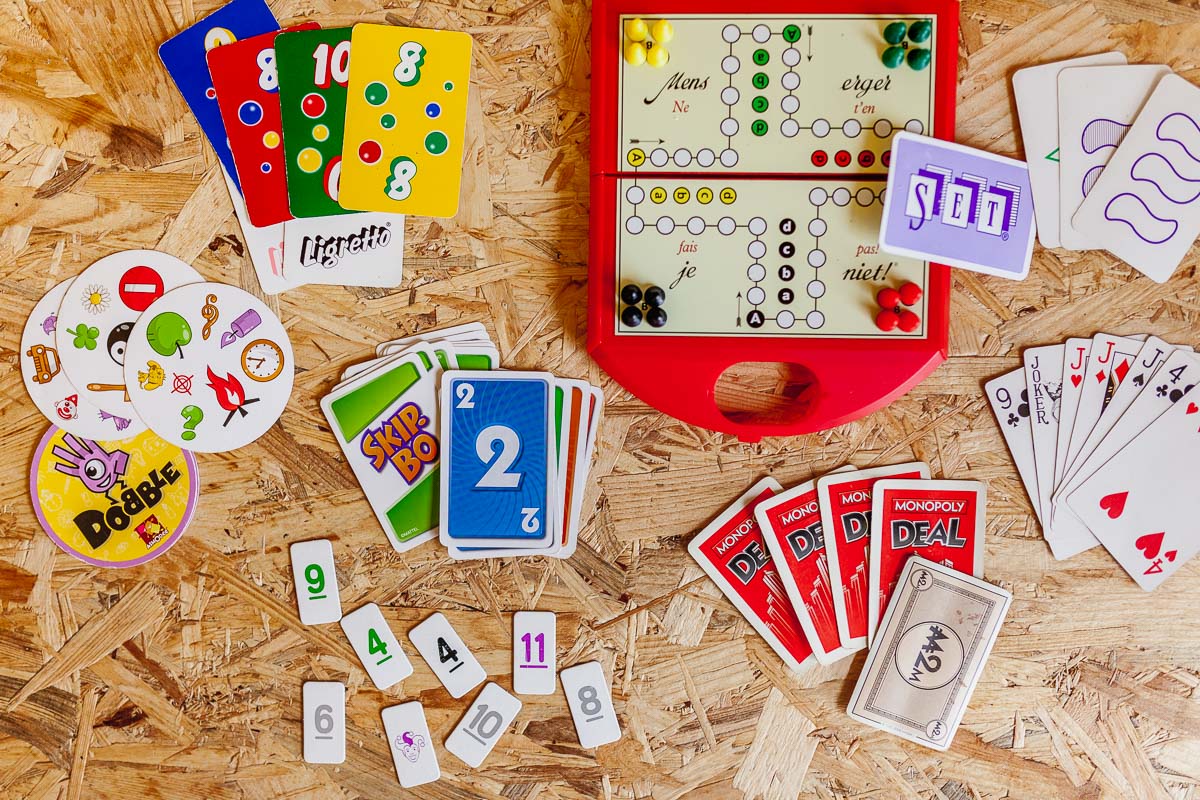 Odds are, you’re looking for the best things to do when stuck at home. Maybe you’ve binged everything on Netflix, or you’re simply looking for another fun thing to kill time when you’re bored. Lucky for you, we know the best games to play at home (or anywhere else!). We are big fans of travel/card games (many classic board games have travel-sized versions), as they’re easy to pack or simply to store somewhere.

Best Games to Play At Home

There are many sorts of games out there, so we’re making a division between board games, card games, playing cards games, and travel games. Many games are made into a travel-sized game, and sometimes, that version is even more fun than the original thing!

The Best Board Games

This classic family board game has now hundreds of versions, including online banking ones. If you want to play a long game, this is the one to pick!

In Dutch, this game is called “human, do not get annoyed” because you will get frustrated!

If you’re good with words, you must give this game a go. It’s like wordfeud, but you can’t just make up any word and see if it’s a word. So, have your dictionary ready.

It’s really no surprise that Rummikub is so popular – it has all the elements that make a great game: it’s easy to learn and fast-moving, it’s different every time it’s played, it combines luck and strategy, and it changes quickly so every player has a chance to win until the very end.

This game is perfect for a long game night too. It’s a civilization-building board game of harvesting and trading resources. Every player is an adventurous settler seeking to tame the remote but rich isle of Catan.

Already got the game? Go get the extensions, travel edition, or dice version!

A little similar to Settlers of Catan, this board game takes a while to play and works with tiles as a playing board. The name Carcassonne comes from the medieval fortress in southern France.

Are you knowledgeable? Let’s check it with the trivia game Trivial Pursuit!

The quick-thinking fast-talking board game for the whole family! Your team-mate(s) have to guess as many names (that you’re trying to explain) as possible, in 30 seconds. 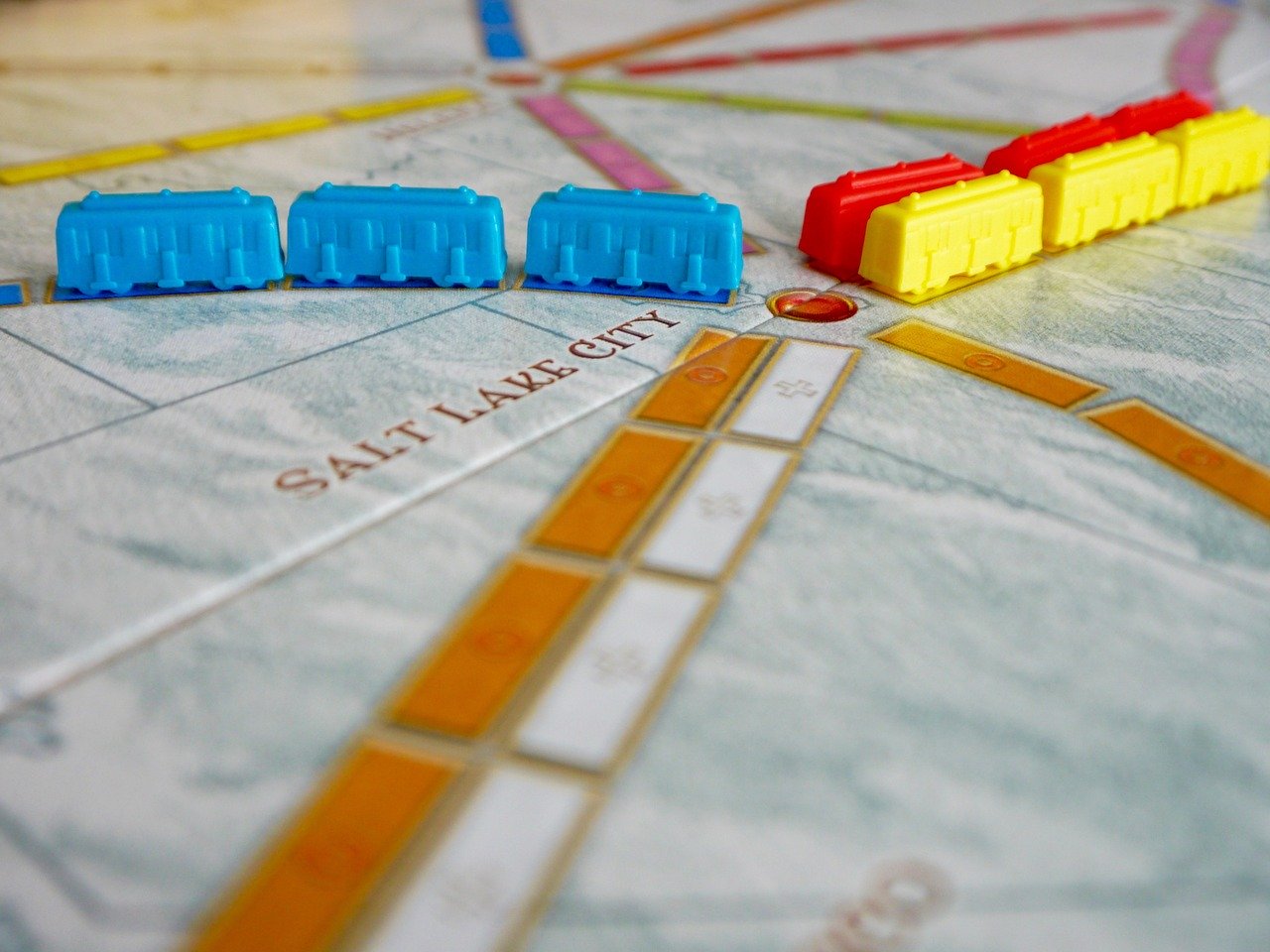 A cross-country train adventure in which players collect and play matching train cards to claim railway routes connecting cities throughout North America. The longer the routes, the more points!

2-5 players
Get Ticket to Ride

Get lost in a maze of fun with the Ravensburger Labyrinth! It’s not a normal labyrinth, it moves every turn.

If you love getting creative with storytelling, this is the game for you. Every picture tells a story – but what story will your picture tell?

If you can’t go to an Escape Room, bring the escape room to you! You have 60 minutes get out of the room together, will you make it?

There are endless card games to play with simple playing cards games. We highly recommend getting at least 2 complete sets to have the freedom to play a variety of games!

Get your playing cards

Got small hands? Invest in a cardholder!

Check out this Youtube channel for card games instructions.

We love travel card games! The best part: you can play these games anywhere and they don’t take up much space. And if the box is too big, just take the cards out and pack them in packing cubes!

The card game of the iconic board game is a lot more fun because it’s a lot quicker! Yet it’s very similar to the family game. Go give it a try!

A fast game where there are no turns! The first person with the most ‘sets’ at the end, wins.

1 or more players
Get Set

If you don’t know UNO, I don’t think you would’ve made it this far into the article. The iconic card game now has a sequel, aptly called DOS!

Two more fun numbers-card games. Skip Bo is an easy yet fun game about playing out your entire stockpile(s). Phase 10 is similar to Rummy, yet different!

This is a chaotic game as everyone plays at the same time and tries to get rid of their cards. But it’s a lot of fun!

Another fast game. Try to spot the same symbol on two cards. There are 5 ways to play the game!

A game about farming! Planting beans, harvesting, and selling: it’s all in the game.

Roll the five dices and try to get all the combinations! The person with the highest scores wins.

There are lots of other dice games, consider buying a dice 10-pack!

There are ‘normal’ citizens and there are Mafiosi or werewolves, there’s a narrator, and a storyline. One of the most fun party games to play with a group of people!

From 6 players
Get Werewolf

This game was originally a pen and paper game and was later turned into a board game. Try to find out where your opponent has hidden their battleships, first person to let all the ships of the other sink, wins! Download an easy printable here.

Video: how to play dots games

Draw lines and try to make as many boxes for yourself as possible!

Players alternately join dots on a hexagon; the first player who completes a triangle in their own color loses.

Another line-drawing game and it is even simpler than the dots and boxes game. Depending on the version, the last person to draw a line is either the winner or loser.

A fun guessing game where you have to draw what you have in mind and your partner can guess what it is (within a time limit). You may only draw, you can’t talk and you can’t write words, letters, or symbols.

Video: how to play Bulls and Cows
2 players

On a square grid, and the players are going to try to form words in the grid by filling out a letter in a box when it’s their turn.

Another word-guessing game, if you can’t guess the word in time, you’re a hanged man.

Video: how to play hangman
2 or more players

Try to make as many 3-letter words as possible from a long word (optional: within a set timeframe).

Make an anagram of the word you had in mind, the other player has to find the word you thought of. Optional: within a set timeframe.

We’d love to hear what are your favorite games! Tell us in the comments below.

Productive Things to Do When Bored at Home

Configuration error or no pictures...