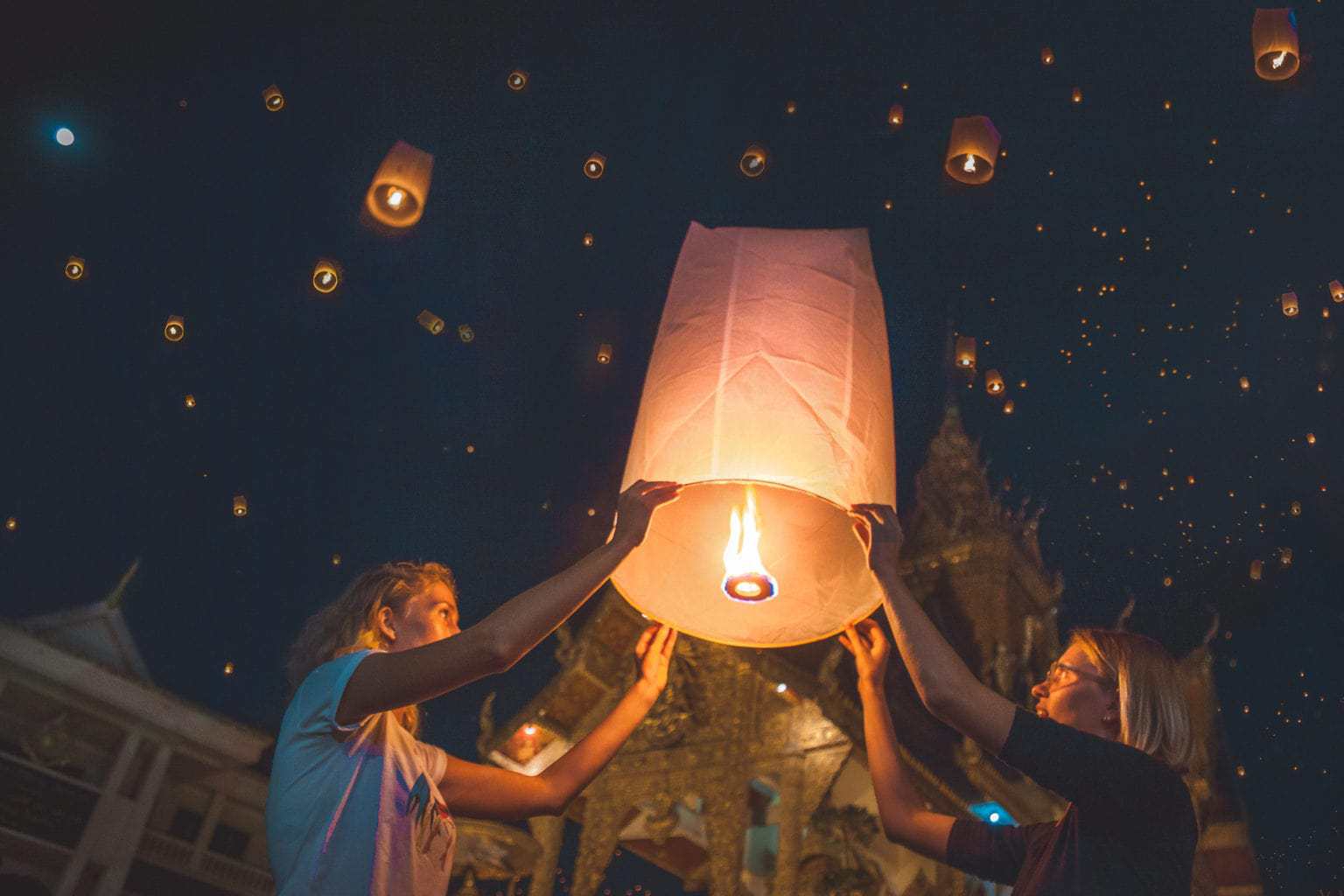 My hands were sweaty and the little box in my back pocket was burning. It felt just as lit up as the lantern we were about to send up in the air. Four pairs of eyes and three cameras were on us. This was the moment I had imagined. The moment would be so romantic and enchanting that we’d feel like the only ones there in a sea of magical lights. In reality, though, it felt… mundane. The lights in the sky were magical, but the crowd around us wasn’t. Then my stepmom in law said: this lantern is for your brother, Rox! “Happy belated birthday Rutger,” she said into her phone. My courage floated away, together with the lantern. At first, it was still in sight, but it soon disappeared into the dark sky. This was not how I imagined my love proposal…

Did you read our love story yet? Read how it all began!

Once upon a time…

Before our departure, I talked a lot about our world trip, to everyone who wanted to hear about it. At work, my colleagues were intrigued by traveling for an indefinite period of time and thought it was so brave how we gave everything up to live our dream.

In the last days working at my favorite coffee shop (real coffee, not another kind of coffee shop in Amsterdam), my bosses were simply in awe of the journey we were about to start. One of them told me: “you should totally propose during your travels! There is never going to be a more special and romantic time!

Of course, it had crossed my mind before. Our relationship had quickly developed and grown strong within no time. Its dynamics continued to mature with our travels, and our relationship as a whole grew even stronger as a result. With that realization, we knew we wanted to stick together. Since we’re two girls here, we had also already talked about proposing and what that meant for us: how would it work? Well, we decided we both wanted to be asked by each other. Of course, it isn’t too serious of a conversation, more a fantasy about the future.

But a seed was planted and my mind had started to think about how I wanted my love proposal to play out.

The heroine has to fight some battles

No one ever told me how difficult it is to plan a proposal (let alone how difficult the proposal itself is). Especially when you’re on a world trip with your best friend & lover with whom you share everything, it’s so hard to not share planning this very special event! But you have to do it by yourself, so you start with the questions: when & where?

A romantic empty beach was the first place that came to mind, but that isn’t us. It had to be someplace adventurous, magical and unique. But most of all: it had to have meaning. The timing must make sense. So naturally, my first idea was to propose during our three-year anniversary. But plans change, and when Rox’s mother and brother surprised us for a visit, in Malaysia, I knew it wasn’t the right time, nor the right place.

As soon as I realized August wasn’t the right time, I knew when was: November. Roxanne’s father and stepmother were coming to Chiang Mai for the lantern festival, Yee Peng. Half a year I fantasized in secret about the Disney-like event where Roxanne would have her most loved ones close by. We would feel like the only people on earth, light up a lantern, look each other deep in the eyes, and I would kneel and open a little box with a gorgeous – but suitable – ring…

A diamond in the rough

What the ring would look like was always vague in my daydreams. Roxanne is not a jewelry-kind-of-girl, so it had to be beautiful, but also fit her. A little research on the Internet (“lesbian + engagement ring” must be the right thing to Google, right?) showed rings with rainbow colored gemstones. Those are special, but maybe not totally Rox.

Then, I stumbled upon a jewelry shop in Chiang Mai: The Metal Studio. They have a webshop on Etsy and when I saw their particular raw diamond collection, I was sold. A raw diamond looks a little bit like a little rock, and Roxanne’s definitely mine.

One last dragon to slay

When you travel 24/7 together for eight months, it is very suspicious when you want to do something by yourself all of a sudden. Especially when you’re the ‘lazy’ one of the couple. So once we’re in Chiang Mai, I made up a story. I needed a haircut. Honestly, I am pretty proud of thinking of that excuse. I mean, my hair did need to look great if I was going to propose! Kidding, but I had been talking about needing a haircut for three months now.

Of course, it was weird how nervously I acted about “getting a haircut” and Roxanne totally knew I was up to something. Luckily she didn’t ask too many questions, because I totally would have blurted it all out.

My nerves did not calm down during the first days we were in Chiang Mai. The excitement and worries were incredibly tiring. So when THE night arrived, the tension was built up BIG time. I couldn’t enjoy the lanterns, food, or simply taking pictures and shooting videos. I should have told someone about my plan in order to make it less scary and more enjoyable. Roxanne thought I was nervous because it was a once in a year (maybe lifetime) event that I wanted to document in the most magical way. So when we were halfway through the night and I shot some pretty great shots, she asked me if I could please stop being nervous.

No, I couldn’t. The later it got, the more the feeling daunted that proposing there would be a mistake.

But then we found a magical spot near a golden temple, with fairly enough space, and I felt my courage gaining strength. I got the little box out of the “secret” compartment of the camera bag (the only bag that is considered fully mine) and put it in my back pocket. We light up the lantern, held it up in the air together… and then my stepmom ruined the moment.

Initially, I had thought I wanted the moment on camera and surrounded by people, but when the time came, I only wanted to be the two of us. Maybe I should’ve considered the empty beach.

So I broke. How embarrassing. I started to cry and I couldn’t stop. I also couldn’t tell anyone the reason I was crying. Believe me, it couldn’t have passed for an “emotional-because-of-the-moment” kind of cry. Roxanne held me tight and said sweet things. We sat on the ground together and my stepmom was padding my head, saying things like “yes it is all a little too much sometimes.” Awkward! Roxanne asked me what was going on, which must have been the fifth time that night. I told her I couldn’t tell her the truth, and she joked, “You weren’t going to propose, were you?”

Curious what the Yi Peng festival looked like? Here’s our video!

And they lived happily ever after

With tears running down my cheeks and snot running down my nose, I talked, cried, and gasped for air at the same time: “yee-he-hees, I waa-ha-has”. Roxanne looked at me with surprise – but also lots of love – and said, “Of course I want to marry you!” We both started laughing about the ridiculous situation. I felt so relieved, and I also realized: when did things ever go like a Disney movie in our relationship anyway?

So later that night we went to a small bridge with cute lights, which we had seen the day before. We were just the two of us – no cameras, no other people – so I opened the little box and finally, officially, made Roxanne my fiancée.